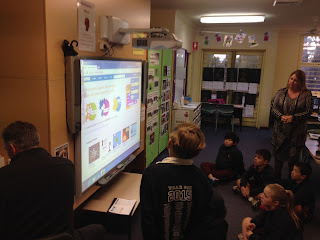 On the 18th of June I took two of my colleagues to Lindfield East Public School to watch Grade 5 and Grade 6 children in action during Code Club. Code Club was developed in the UK in 2012 and debuted in Australia early 2014. In Sydney there are currently more than 20 primary schools that offer Code Club as an extra-curricular activity. The aim of Code Club is for children to leave Code Club ‘inspired to pursue other digital making activities, whether that’s in their spare time, in school or as a career’. ‘But also learning about computational thinking, problem solving, planning, designing and collaboration.’ 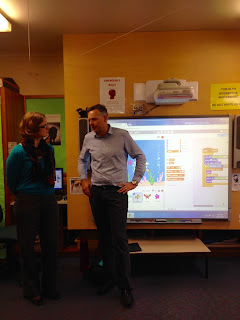 Code Club is run by volunteers, who receive their training for free. We met with one of these wonderful volunteers, Bruce Carney, who is a father of two children at Lindfield East Public School (LEPS) and works for Telstra as a software engineer. Bruce learned about Code Club while he was living in the UK and when he and his family moved to Sydney he approached the LEPS Principal, Andrew Stevenson, and offered to take the lead in setting up a Club at LEPS. Bruce assembled a team of other parent volunteers (typically parents with engineering jobs) together with whom he has been supervising Code Club every Thursday morning, between 8 and 9am.

The morning of our visit there were about 20 Grade-5 children (50% girls). Bruce told us that, this year, there were no specific prerequisites for signing up for Code Club. It was purely based on whether the child was interested in learning to code. This was different to the year before, when they offered Code Club as an enrichment program for their top math students. Most of them, now Grade 6 students, were still doing Club and currently working on a coding assignment in another room. 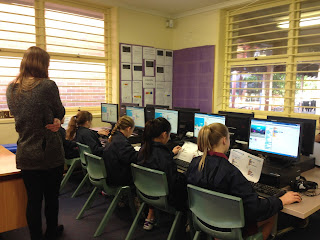 After a short instruction in front of the interactive white board, during which the problems were explained and the children were prompted to think about solutions, the Grade 5 children went to their computers (each had their own) to work on the Code Club Tutorial called ‘Fish Chomp’. When questions arose along the way, a parent volunteer came by to help out or neighbouring coders were consulted for help.


The Grade 5 children were working with program called ‘Scratch’. Scratch is a visual programming (or block design1) language developed by MIT and currently one of the, if not the most, popular programming language for children. Just like LOGO, it is a procedural language: it is telling the computer what to do step by step and how to perform from the first piece of code to the second piece of code. Scratch provides its users with heaps of prepared coding ‘blocks’, but it also allows for custom solutions. We noticed that, independent of given exercise, some children were making their own programs, designing their own backgrounds (‘Stages’) and drawing their own characters (‘Sprites’). 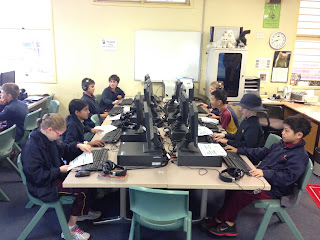 In the meantime the Grade 6 children were crunching their brains on an HTML project. In contrast to Scratch, this project is presented in a text-based programming environment. This means that the children have to type in the code themselves, instead of dragging colourful blocks with prepared code into the coding environment.

After about 45 minutes of coding the school bell rang and the children went out to the playground for a break before the start of school. This gave us the opportunity to ask Bruce and his volunteers some more questions, until they also had to leave for work and other commitments.

We would like to thank Bruce, the other Code Club volunteers and the LEPS Code Club students for allowing us to observe them in action and for teaching us about Scratch and telling us about their experiences with Code Club. It is clear that the LEPS Code Club students are getting a great introduction to coding. Since all the coding activities in Scratch are performed on an online platform, children also have the opportunity to continue their projects at home.